Create an Account - Increase your productivity, customize your experience, and engage in information you care about.

HILL AIR FORCE BASE, Utah – The Air Force F-35A Lightning II Demonstration and 388th Fighter Wing will be performing a formation flyover throughout the state of Utah, Thursday, 30 April, beginning at 1 p.m., in salute to everyone on the frontlines in the fight against COVID-19, as well as those staying at home to “flatten the curve” of the virus.

The formation will be led by the F-35A Demo Team pilot, Capt. Kristin “BEO” Wolfe, with three combat-ready F-35 pilots from the 388th Fighter Wing.

“This flyover is our way of saluting those that are keeping our home-front safe during these unique times,” said Capt. Wolfe. “To provide just a small showcase of our appreciation to everyone that is doing their part to combat the virus, and to say ‘thank you for your sacrifice and service’, to let everyone who has been affected by this pandemic know that we stand by you.”

The flyover is schedule to takeoff from Hill Air Force Base, and will proceed south through Salt Lake City down to the southern border of the state near St. George, before looping up to Park City and Logan, before proceeding south through Ogden back to the base. A flight map will be released later this week prior to the flyover. The flight path was coordinated with Utah State officials as well as members of the Federal Aviation Administration.

The flyover is intended to provide a salute to all the healthcare professionals, front line responders, and essential personnel working to keep everyone safe and healthy during these unique times. The flyover also provides essential training to the pilots, and demonstrates the readiness of the Air Force.

“We are an operational wing, and we’re taking every precaution to ensure our personnel safety while maintaining our combat-readiness,” said Col. Steven Behmer, 388th Fighter Wing commander. “This flyover is just one way for us to enhance our training while providing a small service to our community.”

Utah residents should observe the flyover from the safety of their home-quarantine and should refrain from traveling to see the flyover. Citizens should also maintain social distancing and avoid large gatherings.

The 388th Fighter Wing reached full Warfighting Capability this past January, with the receipt of their 78th F-35, and continues to maintain combat-readiness during this time through segmented operations. The 388th Fighter Wing still has a squadron deployed overseas in support of Operation Inherent Resolve.

The F-35, America’s newest fifth-generation fighter, provides game-changing stealth, interoperability and lethality. It can penetrate dangerous airspace that other aircraft cannot and destroy high-threat targets both in the air and on the ground.

For more information on the flyover or the F-35 Demonstration Team, contact Capt. Kip Sumner ator via e-mail at f35demopa@gmail.com 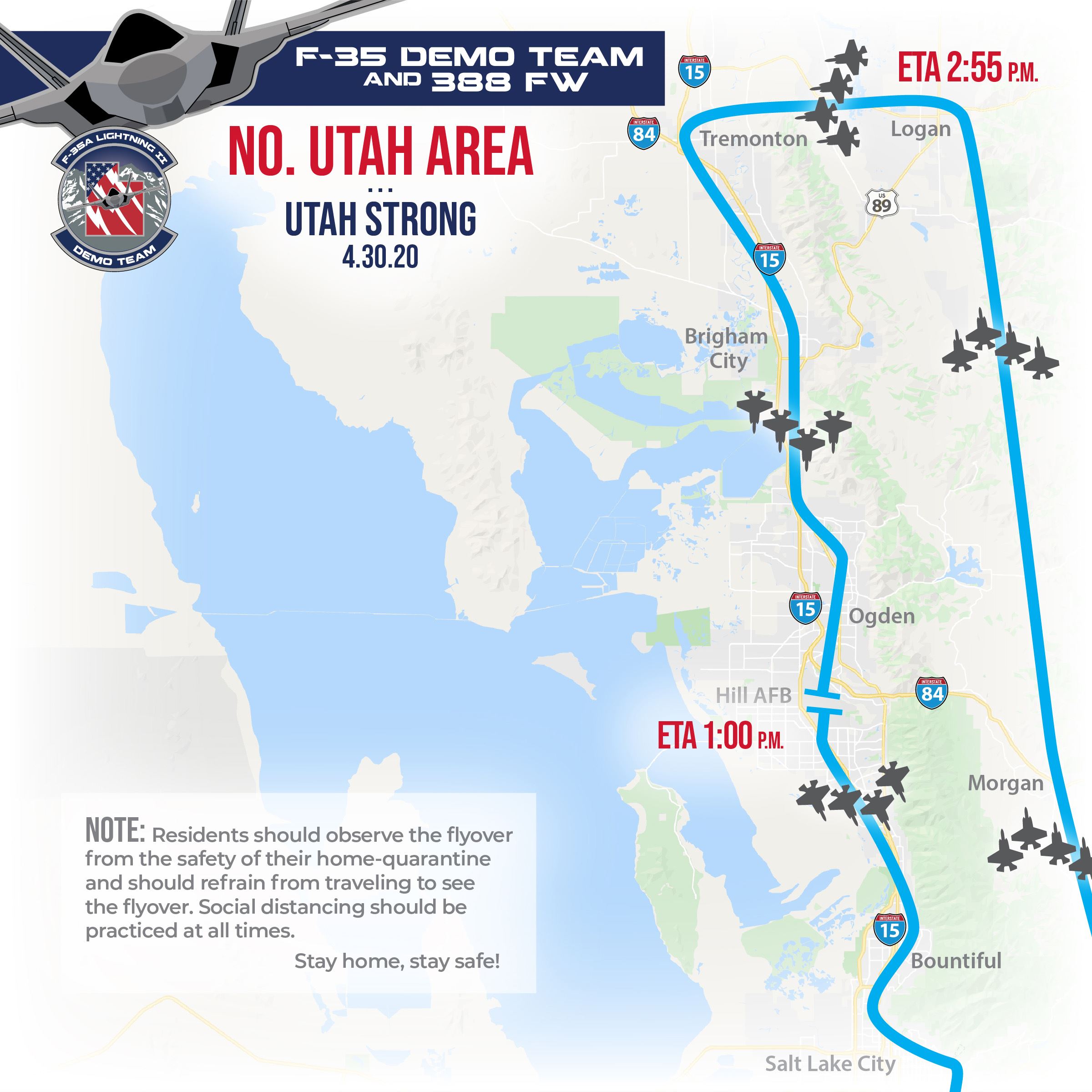