To commemorate the events of 9/11 and to create that sense of community, the Major Brent Taylor Foundation is bringing Davis Remembers – the 911 project to Davis County. They did a similar project in Weber County last year.

“It’s based around the 9/11 response,” said Johnny Ferry, co chair with Jennie Taylor whose husband Brent Taylor was killed in Afghanistan. “If you ask anyone old enough where they were on 911 they remember, it was so impactful. It’s what we felt after 911. We wanted to serve, give blood, do something charitable.”

It was the 20th anniversary last year, he said. “Jennie and my wife served on the PTA together so she knew who I was. We talked about doing something bigger for the 20th year. We wanted to make something special so we conceived the idea of a walk-through exhibit.”

Ferry said they didn’t have any broken pieces from the towers but thought they could use pictures and videos to build something professional like the museums in New York. “We reached out to New York and other groups and the Smithsonian had things I could utilize. We looked to see if others were doing it and nobody was. We thought maybe we’d touched on something.”

The project features an indoor memorial walk-thru media display of the events of 9/11 and subsequent War on Terror responses. An indoor community gathering center with walk-up booths to meet police, fire, military, medical and first responders. There will be historical, Americana artifacts, collections and charities, community service activists and a parking lot Touch-a-Truck event, said Ferry.

“There will be imaging from local communities that takes you back to before 9/11 and after 9/11,” he said. “What the response was and how it changed. Go Utah is giving us Utah imaging at the time. It will be a historical journey. At any type of these events we have to be sensitive to the community and respect them. The goal is to create an environment you can walk through with your kids.”

Ferry is doing presentations at all the cities in Davis County to talk about the project and enlist their help. “Now between September I’ll go to each of the cities to see if they want to be involved,” he said. “We’re not asking for funds, we just want to get the word out. Each city will have two 4’x8’ boards where they can use up to four images that represent their community.”

There will be 20 TVs with visual displays, said Ferry. “With four large format documentary rooms where visitors can watch the events of 9/11. When they come out of the museum there will be 60 community booths and two halls where they can walk up and interact with activists from the community like police and the Red Cross. They can try on fire gear and meet members of the military and show appreciation for what they do.”

The exhibit will be held in the Legacy Events Center. “Commissioner Bob Stevenson arranged for the facility and made it happen,” Ferry said. “Last year (in Ogden) on opening night it pulled in members of Davis County. Sen. Stuart Adams came through and came back again. He said he wanted to find a way to get this out for the whole state to see.”

The Major Brent Taylor Foundation is sponsoring it all, said Ferry. “It’s all volunteers. It’s a way to activate the community. It embodies what Brent Taylor meant to us here.”

The project is meant to remember 9/11, he said. “To remind us of what it felt like on 9/12, the smoke, the digging out. Some people enlisted to fight terror. There was so much emotion and sense of community that caused people to thank their neighbor and give their kids a hug. It’s a bigger thing than all of us.” 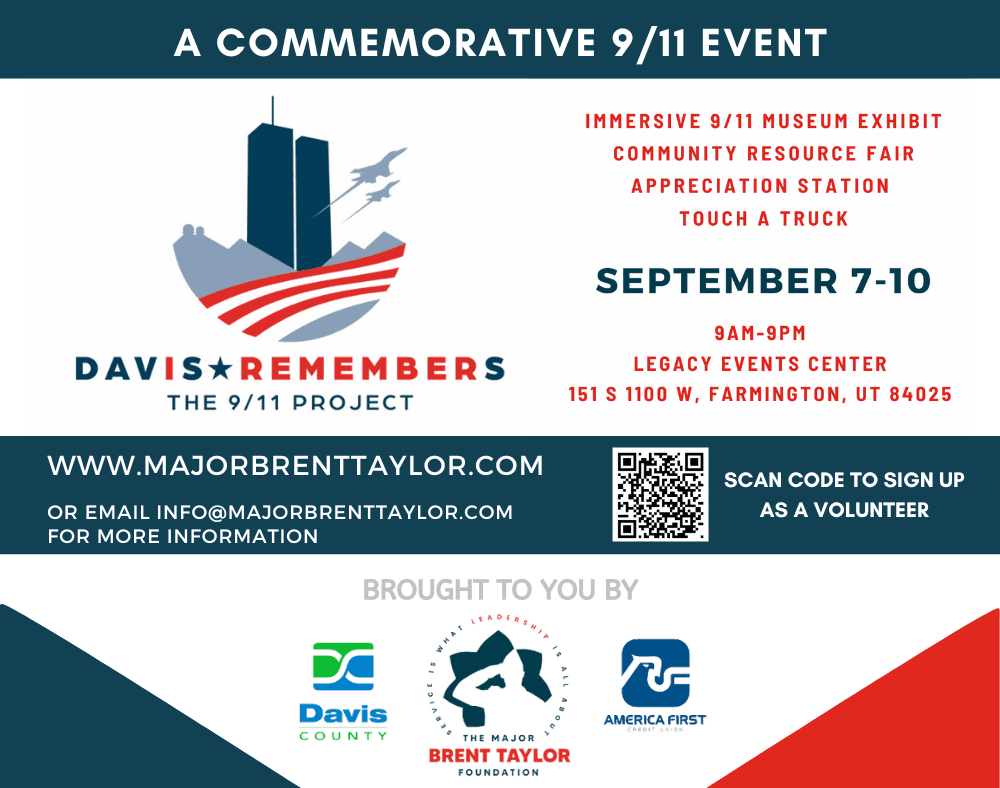